I.E "It's the economy stupid" 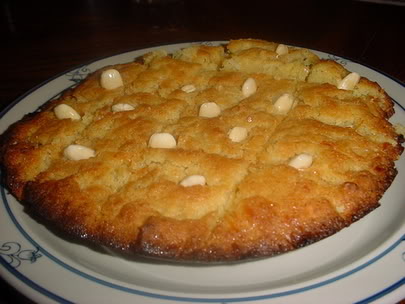 Basbousa. Yum.
The well known story attributed to Marie-Antoinette (although there's no record of it actually being her), Says that when a princess was told that the people are starving because they can't find bread, she responded with "Let them eat cake", which was proof that she neither understood, nor cared about the plight of the poor.
Now when it comes to Egypt, it seems the ruling government in response to the plight of the average citizen, is saying "Let them eat Basbousa"
Now the reason I say this is simple, With so many people living under the poverty line, high unemployment and so many people literally starving in Egypt, It's no wonder people revolted. Hell, it's no surprise that some people revolted specifically for economical reasons.
In post-18-days Egypt (I refuse to say post-revolution, because the revolution isn't over, regardless of what anyone thinks) there have been (overblown & sensationalized ) concerns over the state of the Egyptian economy, as well as the belief that Egypt will be facing bankruptcy , To the extent that the Government has pursued loans of 3 billion $ from the highly unpopular IMF (If you need to know why they're unpopular, This article is a pretty decent start) Even though the general consensus is that no one in Egypt wants help from the IMF because of their country destroying policies, that they've already tried to impose on Egypt. Not to mention the possibility of accepting Aid from Saudi Arabia with no mention of what the terms and conditions attached to the money are (Saudi Arabia is extremely Anti-Revolution, Which is like accepting food from someone that wants to poison you.) In short, I find some of the actions of the ruling government to be quite... well odd.

I'm not going to discuss the clearly intentional diesel shortage in Egypt, I'm not going to mention that the Stock market everyone was freaking out about, ended 3 weeks of trading at a profit of 5 billion Egyptian Pounds (Around 840 million dollars), or even that some of the most notorious corporations are mainly the ones interested in investing in Egypt , those are just a few examples among others that I don't really need to discuss, But I'm going to wonder about this: How does it make sense for a country facing "Economic issues" to condone frivolous spending?

As far as I've been able to tell, most "Modern" governments don't allow frivolous spending. There's ONE White house in the USA. But In Egypt, with all the panic about the Economy, we're still paying for the upkeep of over Eight different (Known) presidential palaces (How many are secret? No clue.) , Isn't Mubarak Gone?! We can assume that the average upkeep of one presidential palace is at least around 10,000 to 30,000 L.E a month. Not to mention that just one of those palaces (The Sharm Palace that Mubarak currently resides in) is valued at 36 million Egyptian pounds (Although originally bought for 500 thousand only).  Shouldn't the people benefit more from these places? If not sold, Can they not be used as touristic attractions? I doubt they can anymore, considered apparently they've been looted of everything of value "Baghdad" style. Then Again, the Military seems to have made "good" use of one presidential Palace (Date and time of the article suggests that Yes, The SCAF were planning to be the "Presidents" of Egypt for a while)

At the same time, No one seems to give a damn that Samir Radwan (who has links to the IMF) the current Finance Minister (who was originally assigned to his post by Mubarak) gave Government newspapers (their Sales were not effected by revolution in the slightest) 42 million Egyptian pounds during the revolution, and yet no one questioned him on that.

Not to mention that the "police" still got their salaries throughout the months they didn't work in (Estimated at around 6 billion Egyptian pounds), Only to go back to the same mentality of superiority, brutality and lack of basic respect for fellow humans, with no real attempt at restructuring or rehabilitation, while so far only one cop (In absentia ) has been convicted for the murder of over 800 protesters, they only just got a minor face lift, and yet they have been rewarded with new gas guzzling 4x4 cars (I guess they need better cars for when the officers cruise the streets looking for women to Harass, and don't tell me it's to restore the cars destroyed in the revolution) , not to mention the fact that The police, Army and other government services have sports teams, that WE pay for while they keep the profits. Or that we're the ones paying for the MOI 'reconciliation' campaign.You know, for cops that don't do anything useful? So they torture & kill us, are corrupt, want to start a new page without accountability AND we're paying to improve their image? Since there's fear for Egypt money wise, then instead of us paying for a pricey campaign to improve police image, shouldn't they you know, do their jobs instead? I can't be the only person that realizes how utterly insane this is. Then again, It comes as no surprise since the "Police coalition" has disbanded after obtaining their demands (Even though the rest of the country has yet to get their demands even acknowledged sometimes)

Or on another note, that State owned and funded media, has a 12 billion Egyptian pound debt while turning out profits. Not to mention that paid manpower is being wasted on the drafting of laws none of us want or even asked for (Like the Anti-Protest law, or the Internet Censorship law) , nor are some of them even critical.

Apparently we're going to have an "Internet Filter" in Egypt, with the usual excuses "Fighting child pornography & terrorism" , But the worrisome part is that they want to ban "Pornographic" websites as well. Yeah, because I totally trust the authorities not to block "Undesirable" websites as well on whim (Like every other Arab country with a similar law have done already), Considering Youtube, Twitter, Tumblr, Facebook, Blogs....etc technically can and do contain pornography, they'll be able to legally block them. They claim they're never going to cut off the Internet like Mubarak did, but with a grand firewall, they won't need to. Twitter or Facebook giving the Egyptian Government a hard time? They won't need to cut off your Internet, they'll just "filter" it using their great firewall (you know, like China or Saudi Arabia). Think I'm over blowing it? The same government that said that if they don't fulfill our demands, Not only can we protest all we want, but that they'd join us in the protests, are the same ones that passed the law criminalizing protests. (To quote the current prime minister Essam Sharaf on his day of inauguration : "I will try with all of my heart to meet your demands. And on the day that I will not be able to fulfill your demands, I will be out there with you and not up here." ). Do you honestly think what I'm saying is irrational?

So we revolt, they continue brutal aggression, they lie to us and bamboozle us, they censor the media (to the extent that In our now "Free" media, the term "Ousted president" has been banned, and you can only say "Former president" about Mubarak), They want to censor the Internet and they blame us for screwing up the economy (which the main reason it's suffering? LACK OF SECURITY! Entire TRUCKS carrying products or merchandise from factories or elsewhere are getting hijacked on the highways that the Ministry Of Interior Mansour Essawy claimed they're securing) , while they're still sinking money into bullshit Mubarakesque expenses.

And does anyone care or notice? Nope, because they've done an excellent job of distracting the masses.

Seriously the amount of wasteful bullshit that is being paid for by Egyptian public funds is staggering. Yes I know the numbers might not be "THAT" Big, but they add up, and these are only the numbers that I'm aware of.... what about the rest?

Can this money being spent frivolously be used to either help the people starving, or at the very least decrease our debts?


So ask yourself this, what other bullshit expenses are we Egyptians still paying for?!

New Islamic Directions: The Ethics of Chivalry Between Genders

I rarely if ever, will only just post a direct link to an article, but this is such a good read, and so relevant to my previous post, that it should be read: Middle eastern Muslim or generally a Muslim, or otherwise.