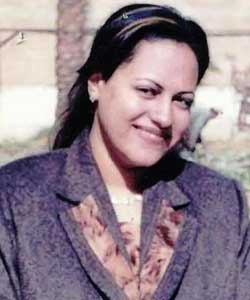 ?
(In case you don't get it yet, It's a play on Helen of Troy)
Before I continue this post, I need to point something out that most people don't understand, the problem isn't in and of itself in "Converting" from one religion to another , the problem is that in Egypt, The biggest problem is the fact that if you convert , you have to "go through" the church or Mosque legally.

There are ways around it of course, especially if you go to another country, but "legally" that's the way it's set, of course I'm not going to even TALK about the hypocrisy concerning "ease" of converting to one religion over another depending on who the government employee handling your paperwork is.


Anyway, let's go on. By now everyone is already aware of what went on in Imbaba, Egypt a few days ago. (and that Link will keep you updated)
Now I'm not going to discuss what happened: The facts remain, a violent clash happened, and a church (or two) were burned, people were killed or injured (of both faiths) ...etc But the point is, I refuse to take things at face value.

Now I've said this OVER AND OVER again: There are no coincidences when it comes to Egypt. To me it doesn't really make sense, the situation doesn't benefit the Salafis (if they are indeed behind what happened) because the more problems they cause, the more public opinion is against them. So yeah, something stinks in the State of Egypt.

I'm not going to say I know for sure what's going on, BUT I'd like to point out a few things that people might have overlooked or forgotten about with ZERO bias towards anyone:

1- The Muslims that we call extremists or Salafis or whatever and their regular calls against any non-muslims.


3- The ex-church official that lives in the USA, was kicked out of the Egyptian Church, and fought with the Egyptian church official saying on a news show "ha2lebha 3alekom" (I'll turn it on you) years ago (His name escapes my memory at the moment)


4- Whoever wants things to appear chaotic without mubarak, his police, and his emergency law.


7- The continuing protests by imams demanding to be independant from ElAzhar, what their motives are, I don't know (and I'm not confusing them with the Imams that want the Independence of the Azhar from the state)


8- With everything else being censored and controlled, Ministry of Aw2af (Wezaret el Aw2af responsible for churches and Mosques) is allowing preachers on both sides to say whatever they want


9- Who "The Coalition of new Muslims" and why they are allowed to instigate & incite violence?


10- The Christian channel (Run from London) saying provocative stuff about Islam on the 7th of May.


11- Testimony from witnesses that swear the Salafis helped put out the fires, and that thugs were behind it


12- The Minister of Interior saying that the Copts are the ones that started firing who later said 4,000 Salafi's tried to invade the churches (Have they actually SEEN the alleys in Imbaba?)


14- A Mosque in Abassyia that was forcibly returned to Government control.

Again, I want you to look at ALL these factors with an unbiased eye, for the sake of this article, assume you are not Muslim, Christian, or even Egyptian. The above factors are just SOME of the factors, the thing is, I doubt any of those factors are unrelated. They're not. The people of imbaba in particular (I've lived there for a while) wouldn't normally rise against whoever their neighbors are. In fact, not only does a Jew live in imbaba (and he's known well and lives normally among them) , but the people from Imbaba and Waraa were helping defend others in nearby Agouza (Including Christians) during the revolution when the cops were off the streets.

So the fact remains, the situation is shit, yes muslims performed the crime, there's no denying that, and as such we DO have a problem we cannot deny, but did they plan it, or did someone else push for it? Are we going to take things at face value?

Well, Think for a second, what did the previous government claim the result would be if we ousted Mubarak and his ilk?

I recall that they said that they had to rule with an iron fist for our "own good" , that If things didn't calm down we'd be invaded by a foreign country , That they were defending us against terrorist threats , that they were protecting us from sectarian strife , and more disastrous , that Mubarak was protecting Egypt and the world from terrorists and terrorist sympathizers along other things.

All those links in the above paragraph, aren't from a few months ago. They're all from the past few days. about steps and things done by the current government, and things going on in the country AT the moment. Does that make sense? Who in the world would want to prove the previous Government and Mubarak right?

Now while we're all busy with the latest disaster, what has been going on?

Logical suspicions that Saudi Arabia is behind the counter-revolution , Whistle blowers getting screwed over for having the decency to report wrong doing (which leaves it almost impossible to actually report corruption and as such end it.) , The house of Saud condemning the violence (Really? How about you shut your Sheikhs up if you really do condemn it? How about you tell your "Agents" to stop stirring shit up?) , Creation of "Coptic militias" (build up for a holy war anyone? Not that I can blame them for wanting to defend themselves) , and probably the biggest disaster while we're all so busy with this shit? The Muslim Brotherhood rejecting a pre-election drafting of the constitution at a conference that included 50,000 MB and Salafi members, obviously so they can maintain control on how it's drafted and what it contains, since they've already declared that they're aiming for 50% of the parliament  which when coupled with other "Islamic" groups, would give a religious coalition a large majority in parliament. Not to mention while All the secular liberal parties are dealing with the incident the MB is focused on the Elections.  Further push for the return of stolen assets from the swiss , Abod el Zomor lobbying for an end to Sectarian strife (yeah, you can laugh if you want) , Private schools increasing tuition AGAIN , Mubarak's Sons detentions being extended , and so many other things.

Also something that slipped our attention completely , the Fact that a British court wants to fine Egypt 900 million L.E AND freeze The Egyptian government's assets in Paris.  Could that be payback and/or a tactic to deter from England returning the stolen Egyptian money that Mubarak's "British" family most likely have? I have no clue if this lawsuit is legit or not, but considering the timing, freezing Egypt's assets at this time could be crippling. (Which is not at all surprising because believe it or not, Even with all the US Aid Egypt receives, Egypt actually PAYS the USA money every year.)
I honestly don't know what the truth behind all this is, but the reality is, details no matter how small or insignificant, are related, its all related. Old or new. All of it. There are no coincidences when it comes to Egypt. None whatsoever. Could be we're just headed to the scenario I discussed a few months ago, or we could be headed to something else, I don't know.
Don't misunderstand the point of this article, I'm not at ALL denying that we have a sectarian issue in Egypt. We do. The Churches were attacked and burned. Racism, sectarianism, sexism....etc Exists everywhere in the world (My American readers, how many Mosques were attacked, burned, vandalized...etc in the past few years?!) , But all I'm wondering is the following : Is this just a random incident among other random incidents, or is it (and the rest of the incidents) part of a bigger plan? In other words, Is Sectarianism the actual problem, or is Sectarianism a weakness being used to cause a bigger problem?

Yes, someone is going to tell me "What's with you and conspiracies?" , I'm not claiming there's a conspiracy, I'm just saying: There are no coincidences when it comes to Egypt.

Edit Note: Before anyone decides to use this article as proof that Egypt is a country full of terrorists, recall that this is about a few hundred people in a country of over 90 million, around 75 million of them Muslims.
Posted by Elazul at 14:07