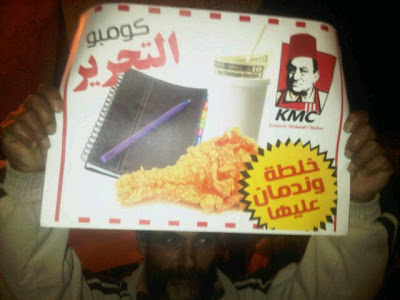 I sometimes feel like the goal of mass media is to obstruct or fabricate news rather than actually report it. In this Article I’ll be explaining two methods that may be quite obvious to most.

I'll be attempting to explain a pretty shitty media policy that's in effect all over the world even in the USA and not Just Egypt.

There is a way the media behaves, that gives bullshit credibility. Could be coincidental, could be intentional. But it's a method used, and in a country like Egypt where the media is tightly controlled, I wouldn't be surprised if it's actually intentional.

This method is quite often used by "extremists" such as extreme right wingers, extreme left wingers...etc for their own personal gains when used in the USA. I would not be surprised if it's used in a myriad of other manners.

This method is actually so simple it's ingenious, but most people don't do the actual research to figure it out and realize that it's all bullshit.

Now the simplest way to explain this is with a hypothetical example, so for the sake of this discussion we're going to assume we have 3 newspapers and 2 news channels. The names are completely made up.


For the sake of this example, we assume that only the first newspaper "Boinker daily" is not credible, while the rest are usually more or less credible in that they only OCCASIONALLY report bullshit.

Now the example starts as so:

Then someone in OuttaMyAss Weekly will write a story based on the report from the news channel, claiming the "Rising problem of bestiality in Georgia" again, adding more input from "Experts" that give credibility to the title, even if the credibility really isn’t in context, such as a psychologist explaining the psychological reasons for some people being attracted to farm animals.

By then Worldwide Swanky news, will run a story about the “Crisis of Bestiality in the USA”, and might even interview hysterical relatives or neighbors, show footage of the cow “victim”, show the pervert’s family claiming that it “shattered the family”, take a sound bite out of a press statement out of context by an official that says “We will remain vigilant so a crime like this can never happen again” and basically anything else that supports their notion that it’s a “Crisis”.

Pretty soon, every media outlet in the world, will be discussing the "crisis" of bestiality in the USA, even though the original story was bullshit. But because the real story, got hidden beyond so many layers of "citation bullshit”, People end up believing the fake story. Pretty soon people are discussing it, blogging bout it, and it becomes a “Public opinion” issue, with people lobbying or campaigning to put a stop to it, some people using it to decry the "Evils" of Latino immigration….etc

In fact, it's so silly, that the original source might have just been an opinion piece by someone at Boinker Daily. In fact it might not even be an opinion piece, but rather a letter someone sent in that was published in the Boinker Daily. Hell, It might just be a comment on their website by some anonymous user!

The same happens with almost EVERY media outlet, EVERYWHERE in the world. So be careful you're not falling for "Citation Bullshit"

There are two media sources in Egypt that are NOTORIOUS for doing that. “El Youm El Sabaa” (The 7th day), and "El Dostour Online" (The Constitutional Online).

There is one other method that both are notorious for using, and that’s by writing an entire story based on a human “Source”, without citing any other sources.  But now because they ran the story, other more credible sources will cite them using the above method, which ends up giving the stories published by "El Youm El Sabaa" or "El Dostour Online" credibility because other more credible sources have now reported the same thing.

So remember, we’re in the day and age of wide spread information, it might be a good idea to take note of these methods, and make sure you’re not being tricked into believing something that’s completely bullshit. Especially during these trying and confusing times. Especially in Egypt.