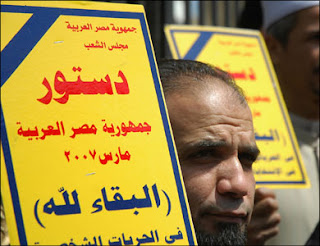 The following is part of a note I initially wrote on Facebook on Feb 20th 2011 called "Enough Misinformation, Use your Minds and Think!", that I wrote because I was tired of people spreading bullshit. I've decided to split it up and post it here, the following intro was the intro for the note.
----------------------------------------------------
Ok, im really getting sick and tired of people spreading around rumors, without actually doing any research, so here, let's go.
(Note: Before you think of telling me "You're full of shit" I actually did research. Unlike 99% of the people out there. So even if i might be wrong, I at least bothered to do some research, and if you can prove that i'm wrong, I will gladly add your proof and admit my mistake)
(Feel free to copy, share do whatever you like with this note, Just credit me please)
----------------------------------------------------
The Constitution:
In case you missed it. We have no constitution right now. Our constitution is NOT being amended, rather we are getting a new one based on our old flawed one. This is the time to push for a COMPLETELY new constitution.
Why? Basically the "Constitutional modifications" that are supposedly going to occur in Egypt. Technically speaking, the constitutional modifications being done are unconstitutional based on the current constitution. Meaning that in reality, the constitutional modifications are not actually just a modification. But rather a complete replacement of the current constitution, with a modified version of the current one. (yes it's confusing but think about it). So since we're replacing the constitution anyway, why are we still basing our new one on the extremely flawed "current" one?
Further proof, based on the above, it means we either have no constitution, or Mubarak is still in power.
So Why can't we just modify the "current" one?
The Problem is most people haven't actually read the constitution , and don't understand that the few articles being amended aren't enough.
The current constitution (1971) is DEEPLY flawed. It's core is a constitution created by AbdelNasser (1956) to maintain complete control over the country. It is the constitution created as an alternative to the true democratic liberal constitution of 1954 that was never implemented. Every revision made since has increased the flaws, not decreased them. Even if every amendment made is reversed, and the amendments we want get put in place, the constitution would still be horrible compared to for example, the western constitutions or a modified version of the 1954 constitution.
For example, there are NO methods of checks and balances between Judicial, Executive and legislative powers in the constitution.
Also, the next president (whoever he maybe) will still have supreme power over the Judicial , legislative and Executive powers.
Both of these problems alone are a disaster in and of themselves, so imagine the rest?!?
Just as another example, there is NO planned modification (or Demands really) of the laws relating to political parties, even though the constitutional laws relating to the political parties are a disaster.
There are no planned modification on Union laws.
Don't believe me? http://www.almasryalyoum.com/en/news/military-council-greenlights-change-6-constitutional-articles
Quote:
"The decision adopted by the military authorizes the panel to consider the abolition of Article 179, along with amending articles 88, 77, 76, 189, 93, and all other relevant articles which may need to be removed to ensure the transparency of the electoral process.
Article 77 of the Constitution does not set a limit for presidency periods. Article 88 annuls judicial oversight over the elections. Article 93 meanwhile grants parliament sole authority for determining the legitimacy of MPs' memberships.
Article 189 gives the president and the People's Assembly an exclusive right to amend the constitution, while Article 179 on counter-terrorism restricts people's freedoms and rights."
Does it mention anything about presidential powers or methods of checks and balances? nope.
Still Don't believe me on the over all point of this section? Don't take my word for it, take the word of experts:
http://english.ahram.org.eg/NewsContent/1/64/5820/Egypt/Politics-/Experts-and-Judges-reject-constitutional-reform-co.aspx
"Tharwat Badwy, a respected expert on constitutional matters, has stated in an interview with Ahram Online that the constitutional amendments proposed by the Supreme Council of the Armed Forces, a task now handed to the constitutional reform committee, lacks legitimacy. He stressed that the supreme council is not elected by the public and so does not replace the parliament to propose specific constitutional amendments. He added that he withdrew from the first committee, proposed by the former vice president, after it became clear that the current Egyptian constitution of 1973 isn't legally fit for amending. The January 25 revolution has rendered the current constitution illegitimate and the only course of action now is for a constituent assembly to be elected and draft a new constitution."
Compared to the current one, the 1954 constitution that was never used is a MUCH better basis for our new constitution.
Just so you understand what i mean by the constitutional amendments not being enough, read through the constitution here: http://www.egypt.gov.eg/english/laws/constitution/default.aspx
Compare that one to this one (If you can Read arabic) here and here (Keeping in mind the 1954 one was made in 1954 so it has a few bad points in there, that can EASILY be changed, in fact, the constitution is consistent with every GOOD constiution worldwide made at the time and amended further later on)
http://www.almasry-alyoum.com/article.aspx?ArticleID=288328
and
http://www.almasry-alyoum.com/article.aspx?ArticleID=288376
Now do you get it?!
Note: Just to clarify things, Egypt has had four different constitutions the 1923 constitution, the 1954 constitution that was never used, the 1956 one, and then the 1971 one (that's still in effect today)